India: A Journey of Rediscovering Oneself!

Go India Initiative - Blog - India: A Journey of Rediscovering Oneself! 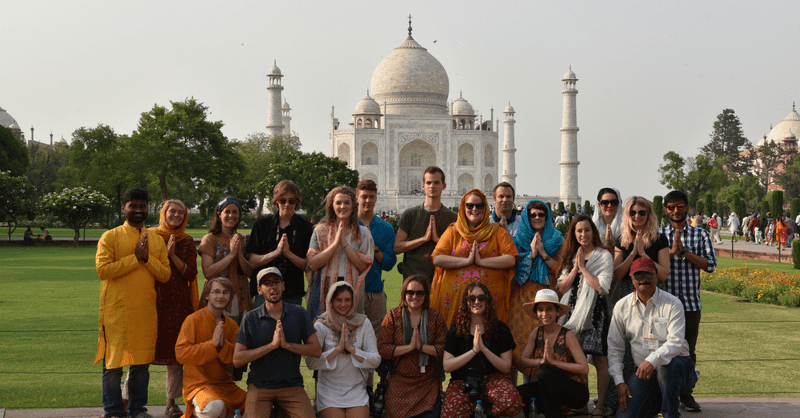 May 2018, has been special for me, as my colleague Farhan and me were appointed to host our firm – Think Education’s flagship project Go India Initiative’s first US student group from Northwestern Michigan College (NMC) in India for 2 weeks to study Humanities, Religion, & Culture.

Along with the visiting group we too experienced the cultural, spiritual and educational aspects of the journey. In this blog I’ve shared some facts about India, some enlightening moments and a sneak peak of our journey to North India.

What is India? Why must one visit India at least once in their lifetime?

India is popular for its largest democracy tag – India is one of the three countries where democracy has survived and thrived with over 800 million voters.

India is also known for its religious, linguistic, ethnic and cultural diversity.

Most other countries in the world wonder how India manages to maintain and sustain its unity with having more ethnic groups and religions than any other country in the world. Besides these there are numerous castes, 15-odd languages spoken in various dialects and substantial number of tribes and sects but still the people of India live together in harmony.

What are the other factors that India is known for? Its size as it’s the seventh largest country in the world, culture, cuisine, music, astonishing space programs, IT sector, armed forces, and especially its known for its movies.

The Indian film industry is the world’s largest industry in terms of film production as we produce more than 1000 films in a year comprising of different languages which are famous in Asian, African and some eastern & western countries…

One can learn about India’s culture, religions and diversity from movies, books and some sources on internet, but one can’t gain enough understanding until one visits and experiences India!

“What is India? What does the world think of India?”

These were few questions which were on our minds when my colleague Farhan and I were preparing ourselves for this project. We did a lot of research and read many articles to understand what foreign nationals think of our country as we wanted to know the perceptions our visiting group had about India because the participants were studying religion, humanities and culture as part of their curriculum.

Through our interactions with the visiting group during our journey of exploring India together, we found out that most of the students who are studying religion, culture, history and humanities and the professors who are teaching these modules were really interested and keen on visiting India at least once in their life. This is because India is home to major religions, oldest culture & philosophies, rich diversity, ancient inventions and many more…

Many great scholars, world renowned philosophers, historians and scientists praised India after they visited and explored India. For some of them it was of passing significance, for some the country had a profound effect on their being, and others are just convinced to relocate themselves and have adopted the way of life based on their Indian surroundings.

After his exploration of India, the literary genius Mark Twain described India in his own words,

India is the cradle of the human race, the birthplace of human speech, the mother of history, the grandmother of legend, and the great-grandmother of tradition. Our most valuable and most instructive materials in the history of man are treasured up in India only.”

World renowned philosopher and the historian Will Durant said,

If there is one place on the face of earth where all the dreams of living men have found a home from the very earliest days when man began the dream of existence, it is India.”

There are some parts of the world that, once visited, get into your heart and won’t go. For me, India is such a place. When I first visited, I was stunned by the richness of the land, by its lush beauty and exotic architecture, by its ability to overload the senses with the pure, concentrated intensity of its colours, smells, tastes, and sounds… I had been seeing the world in black & white and, when brought face-to-face with India, experienced everything re-rendered in brilliant Technicolor.”

After reading these quotes, an immediate thought crossed my mind – What made the scholars, historians or philosophers have an unconventional opinion about India? It’s not only these scholars and historians; many known personalities who visited India claimed that it had a real impact on them, they found their purpose of existence and this changed their life forever.

At the end of the program, we asked the students and the faculty how the experience has changed them personally. Here are the few things they had to say.

With the feedback we understand that the participants achieved their purpose of the visit. They found answers to many hard questions like Who are they? What do they really want in their life? Why do humans suffer and what is one’s purpose in life? Why must one be grateful for all the little things? Why must one be respectful and kind to the other? Why must one take care of mother nature?

If I put all these questions into one,

Their experiences in their own words…

The faculty of religion at NMC who accompanied the students to India, shared that she can now reconnect everything with the religious texts specially those originated in India with what she has studied and taught her students – the ultimate message of all those sacred texts is same, the purpose of Human being is finding thyself and she has experienced it here.

One of our participants shared their experience in Varanasi… She said the moment she landed in Varanasi she could feel the vibrations of the land, the sacredness of the holy land which has 1000s of years of history, which is the oldest civilized city in the world where many popular poets and personalities were born, also one of the most important religions of this world were established, the land which is said to be founded by Lord Shiva. She also said that visiting Varanasi has helped her understand the relationship between life and death and the celebration of the two as they are most important events in a human’s life and how Indians treat and celebrate death in the most sacred way. It’s not something one could explain or write. One can only experience it.

Another participant expressed her experience after serving at Langar – a community kitchen in a Gurudwara (Sikh Temple) where a free meal is served to all visitors, without discrimination of religion, caste, gender, economic status or ethnicity. She felt this was the best experience of her life and she was really glad that she had the opportunity to do this because this is something she wouldn’t be able to do back in the US. An opportunity to serve 1000’s of people at a time and everyone is equal here at this place. This makes the experience unique, and incredible!

One faculty shared his experience after witnessing a Sunni Mosque, a Shia Mosque, Gurudwara, Buddhist Monastery, a Hindu temple, and the Church all located together at one place in Leh… he said, “Now I got my answer to how Indians treat other religions and live in harmony – this sums up everything!”

One student shared her experience after visiting the NGO in Delhi and interacting with the children, she mentioned that this was one experience that she will never forget in her life. The visit and interaction made her realise how lucky and privileged she is to have the material accessibility in her life.

Another shared his experience after visiting the confluence of river Zanskar and the river Indus in Leh. He felt that this was the ultimate beauty he has experienced in his life and he felt extremely grateful to witness that.

One shared his experience after hiking in the Himalayas when we reached a point which was at an altitude of 15000ft, he did mention that he has gone hiking a couple of times before and participated in a lot of adventurous activities, but the trek that we were a part of was very special for him as he was spiritually uplifted like never before.

At first, I was confused but I found my answers when I personally witnessed how my country has had a real impact on human beings and especially how it has impacted our student group. Traveling across 8 cities in 2 weeks, this journey taught me more about my country, I had the opportunity to share our culture, tradition and rituals in our daily life with the visiting group, and interact with fellow Indians from various cities.

We also visited temples and monasteries, trekked in the Himalayas at an altitude of 15000ft, served and prepared food at Langar in the Sikh temple in Delhi. These were all unique and unforgettable experiences.

The participants shared their personal experiences and thanked us for organising a memorable trip to India. This journey inspired the participants deeply as everyone rediscovered themselves and through the span of 2 weeks each of them felt spiritually enlightened.

Through the students and my own experiences, I realised that this country is unlike any other. It’s not one place or one activity that changed and helped these participants to rediscover themselves. It’s the different cultures and traditions, the different languages, different religions, rituals, beliefs and different people all in one country – living in harmony.

One visits India and explores and experiences every aspect of life here and it’s this, the combination of everything makes it a unique destination to visit. It’s this combination that makes people realise many things, which ultimately helps one to rediscover oneself.

I believe everyone must visit India at least once in their life and embark on the journey with no preconceived notions. I consider myself lucky to have had the opportunity to be a part of this evoking journey. I assure you after your visit to India, you can write a journal and that too will not be enough to express every emotion felt during the visit.

There is not a moment when you will feel lonely here as there are 1.3 billion people around you. You most definitely won’t go hungry since every part of the country has a different cuisine to offer.

Bored? Oh, that I can guarantee – there is not a dull moment to be experienced. Every minute, every second there is something happening in every corner of a street and this adds to the history and greatness of this beautiful country.

We Indians believe, “Atithi Devo Bhava” a Sanskrit phrase which means “a guest is equal to God” and so I join my hands and welcome you to come and explore my country.